Once in a while I have an idea that could potentially make (my) Tesla better and I like to share that with the world.
And with Elon Musk in particular 🙂

Show the rainsensor locations on a map – jan 2018

Why not share the Tesla’s rainsensor’s status on a map? Unanomously ofcourse.
It would make a very accurate live percipation map, especially in areas with lots of Tesla’s.
Add temperature as well and a new crowd-sourced weather map is born.
Google does it with it traffic congestion as well, and so does TomTom with Vodafone’s sim-locations. 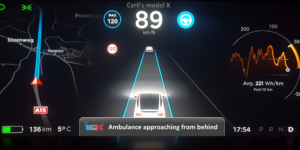 Even though I keep an eye on my rear-mirror rather frequently, it still sometimes catches me by surprise; flashing lights of an upcoming ambulance or other emergency vehicles.
As cars get better isolation from outside road- and traffic noise, and get better sound systems as well, it makes it harder to hear sirenes.
Why not use the back-up camera to detect flashing lights (red/blue) and then warn the Tesla driver in the dash? It could save precious seconds for those on their way to hospital and make the life of the emergency driver way easier and safer. We could all benefit from this and sure, an over-the-air software update could add this feature overnight 😉

About Talking Tasman
The Talking Tasman is Cyril Vonken, owner of a Tesla model X who likes to share his passion and experiences about Tesla and technology. Most blogs and videos are in Dutch, however some might be subtitled or in English.